On the other hand, 6.2% of Chileans surveyed were diagnosed with this pathology, showing a significant difference in national prevalence between women and men, with the former having a prevalence of 10.1% and men of 2.1%.

The objective of the Millennium Institute for Depression and Personality Research (MIDAP) is to generate scientific knowledge based on a multidimensional understanding of depression in interaction with personality, in order to maximize the effectiveness of interventions by identifying agents and mechanisms of change present in prevention, psychotherapy and rehabilitation.

a.- To provide scientific knowledge on depression and personality based on a multidimensional perspective that integrates cultural, social, evolutionary, psychological, psychophysiological and genetic aspects.

b.- To examine age specificities associated with depression and personality, during pregnancy/breastfeeding, infancy, adolescence, adulthood and major adulthood.

c.- To generate knowledge that can nourish mental health policies for the development of better prepared prevention, therapy and rehabilitation services.

A multidimensional approach to the study of depression
In order to achieve a deep understanding of the causes of depression, the effectiveness of treatment and prevention, MIDAP uses a multidimensional approach that employs the capabilities of its researchers from different disciplines to generate an empirical model of the aetiology, prevention, intervention and rehabilitation of depression. This model studies the relationship between depression and personality, along with the different dimensions of human functioning that have been empirically associated with this disease. 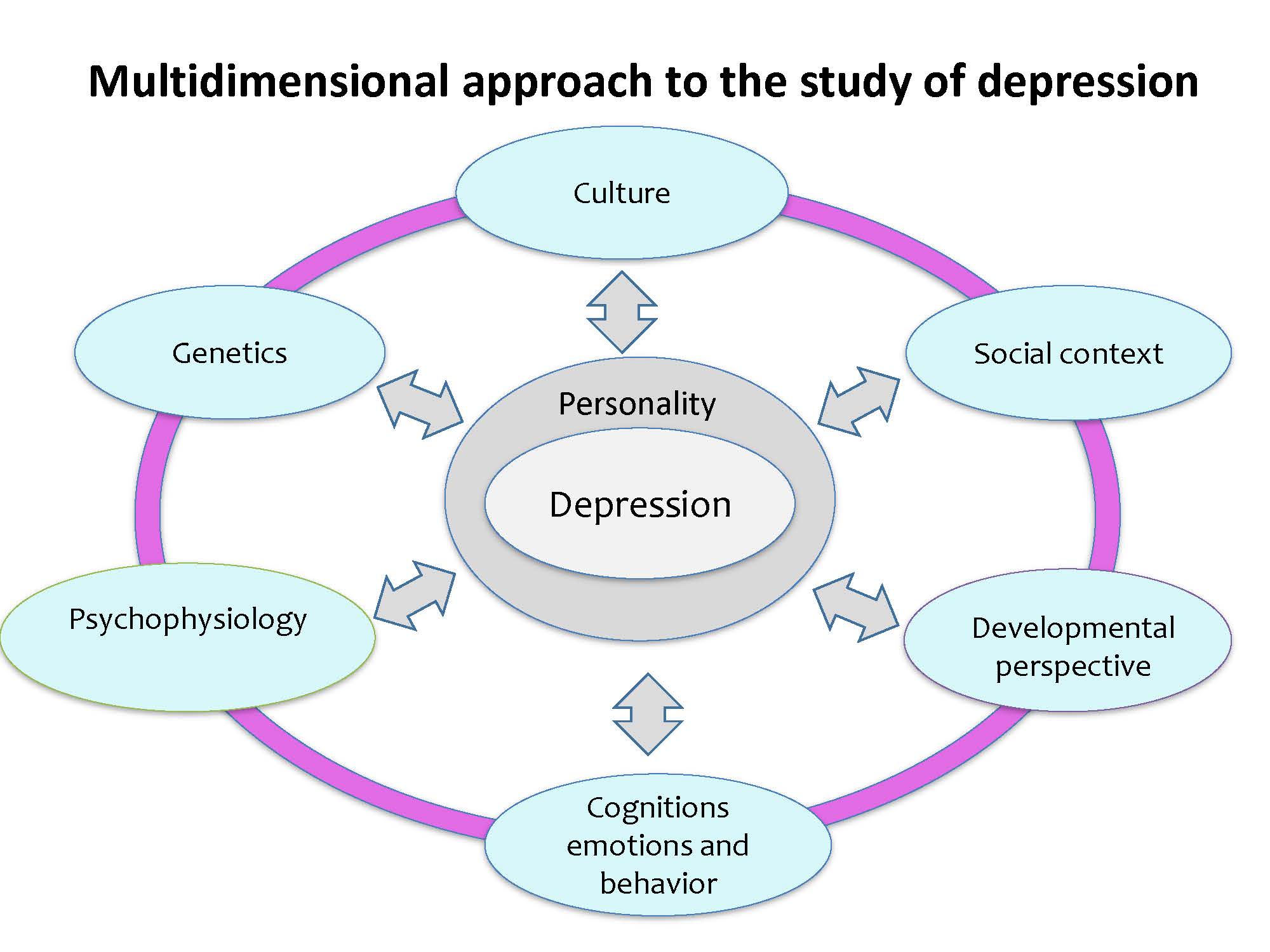 The Multiple Dimensions of Depression
The different aspects of the image have been empirically associated, separately, with depression. Some studies on culture and depression have shown differences in the epidemiology of depression in different countries, as well as differences in the symptomatic expression of the disease. The importance of the social context for understanding the higher prevalence of depression at certain socioeconomic levels, and in women more than in men, has been made clear through explanations that relate the illness to stressors associated with poverty. From a developmental perspective, empirical evidence has emphasized the importance of early childhood conditions, the relevance of depression and suicidality in adolescents, and the epidemiological impact of depression in older adults. Cognitive and emotional biases have also received important empirical support, including irrational thinking, memory and attention biases, low self-esteem, attributional styles and negative thoughts. Within psychophysiological studies, the abnormal response of the hypothalamic-pituitary-adrenal axis, an essential part of the neuroendocrine system that controls the reaction to stress, is a crucial component in the development of the disease. On the other hand, genetic studies have not been able to identify a single main effect, incorporating different types of relationships between the genome and the environment, such as the interaction between the polymorphism of the serotonin transporter gene and adverse life events.